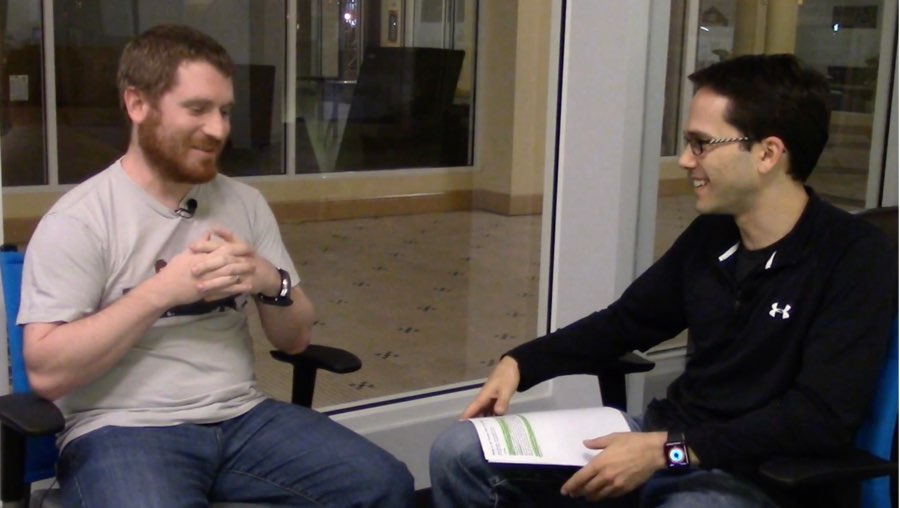 Ian Thomas’s career has largely been shaped by his work with Open Source. Four years ago, Ian was coding flash at a defense contractor and hoping to find a gig as a full time Android developer. He had applied for a job but his potential employer questioned his lack of professional Android development experience. He promptly pulled up his GitHub account, showed off his Android projects, and they hired him on the spot.

Online he’s known as ToxicBakery, where he cooks up tasty servings of open source. Since 2012 his biggest open source contribution has been working on project called Rajawali, a pure Java 3D engine for Android based on OpenGL. You can think of it as alternative to using the Unity engine for 3D. In our Show & Tell you will see him walk through the project.

Ian often finds himself being the software architect and planner on projects, which we can is evident from the number of lines he’s personally removed from the Rajawali project, specifically 130,157 (while in contrast he’s added 60,521).

Ian’s greatest contribution to Rajawali and from many of his other projects I’ve seen stems from his at times relentless goal of reducing code bases. A good example of this is to compare his contribution chart with mine - I am the leader in additions, while he is the leader in removals - all of them useful. He embraces Object Oriented Design and Abstraction to their extreme. – Jared Woolston, code committer on Rajawali

While working on Android applications he began to tire of having to look all over the web to find bewteen-page animations to use. Thus he created ViewPagerTransforms, a library containing all the most common animations. This project became his most popular self-created open source project, with 1,381 stars on github. The project ended up helping him land an interview with Google, although ultimately he didn’t get the job.

If there’s one thing that bothers Ian most about open source, it’s projects that don’t have build instructions. He doesn’t want to try to figure it out, and neither does one else.

The biggest thing I have to thank Ian for is as a networking peer. I was hired at the company I work for in no small part due to a good word by him and him even suggesting I apply in the first place.“ – Jared Woolston, code committer on Rajawali